Never give up - linda's story of strength and perseverance

“And then it touched me – now it’s my personal fight and journey.”

For Linda Harding, participating in the Ride for Roswell was usually about honoring someone else. She’s been riding since 2012 on the team Chief’s Spirit in honor of Mark Williams, the cousin of her life partner, Joel.

Linda was diagnosed with multiple myeloma in April of 2019. At the time, she was training for her fifth half ironman. But all that had to be put on hold as she faced her battle with cancer head-on. She began chemotherapy in May.

As an athlete, it was extremely important to her to remain active and push herself, so she rode the 30-mile route in the 2019 Ride for Roswell, just one day after receiving cancer treatment.

“That was extremely important to me,” she said. “That I could sustain this, that I could be healthy and get through this. I had the support of my family and my daughters. And it was such a good ride. We thought maybe I could do 5 or 10 miles, but we ended up doing 30 on the river.”

In November that same year, Linda received her bone marrow transplant and in December, she rang the victory bell.

A new spin on an old tradition 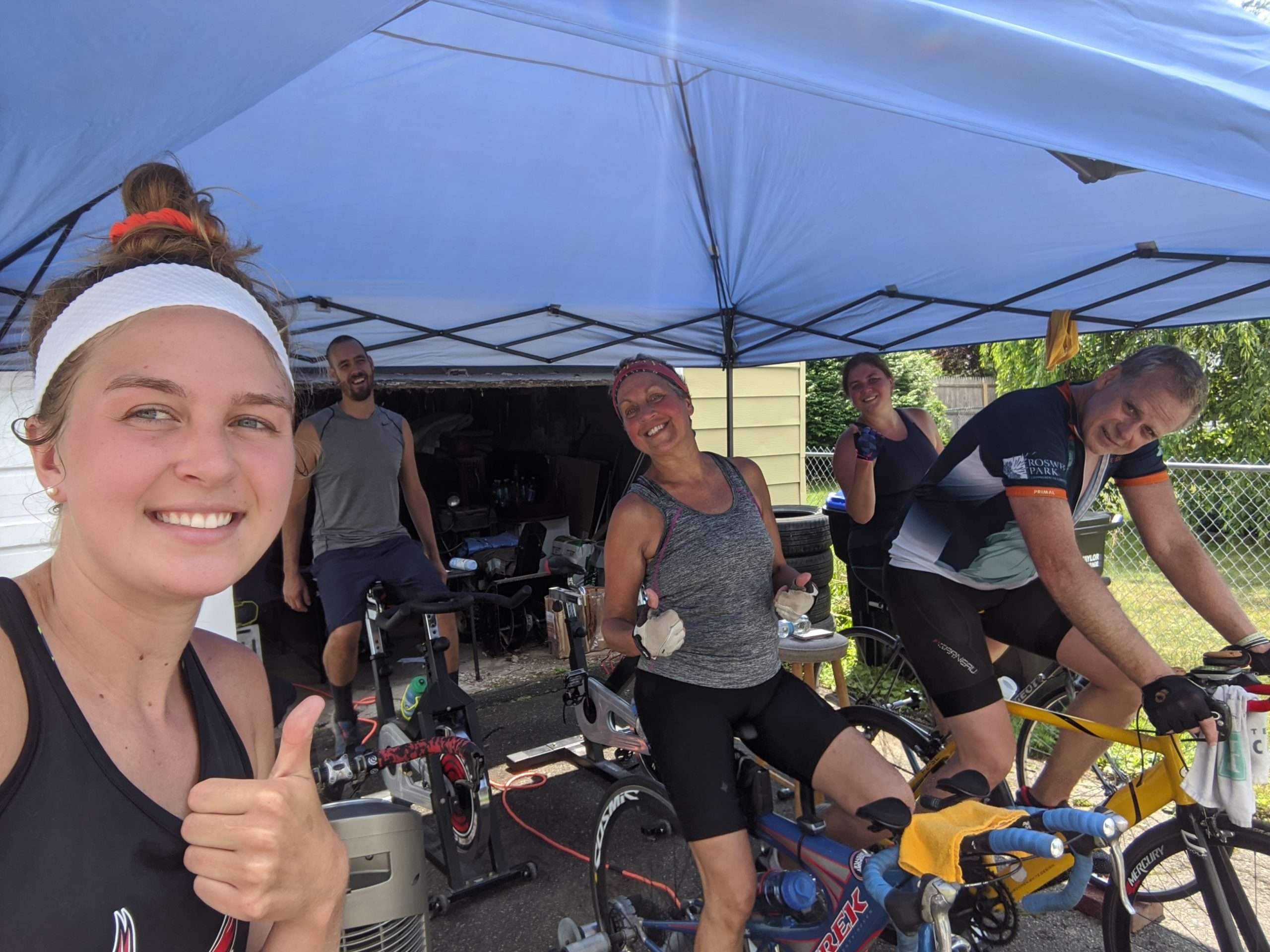 When the pandemic hit in 2020, Linda and her family were unsure of what the plans for the Ride would be. But they were committed, so they decided to ride their own way in June and began reaching out to friends and family for support, who happily contributed to their fundraising efforts.

As they got closer to June, Linda was having some balancing concerns and even suffered a few tiny strokes due to side effects of her diagnosis. They were worried about riding on open roads, so they switched gears.

They decided to set up stationary bikes in their driveway and ride 40 miles. They tried to bring all their favorite Ride moments to their home, including stops every 10 miles, peanut butter and jelly sandwiches, music and more. They set up extra bikes and some of her daughter’s friends jumped on and rode with them. Linda’s 80-year-old father even joined in the fun! Neighbors stopped by and cheered them on.

They used Facebook Live to stream the last few miles and it turned into a real finish line experience. Everyone was yelling and cheering as they finished their 40 miles.

For this year’s Ride, Linda and her family are planning to come out to an in-person Ride on August 7, as well as ride their own way the last week of June.

Linda’s favorite part about being a rider is teaching her three children the importance of never giving up. She wants to be a role model to her daughters, Becky and Caitlyn, and her son, Troy, who is a Marine Corps veteran.

“As a mother, it’s one of the most powerful life lessons you can teach. To go through cancer as an athlete and to be able to do the Ride is liberating for me.”

make an impact with linda this summer

register to ride
Previous
Next