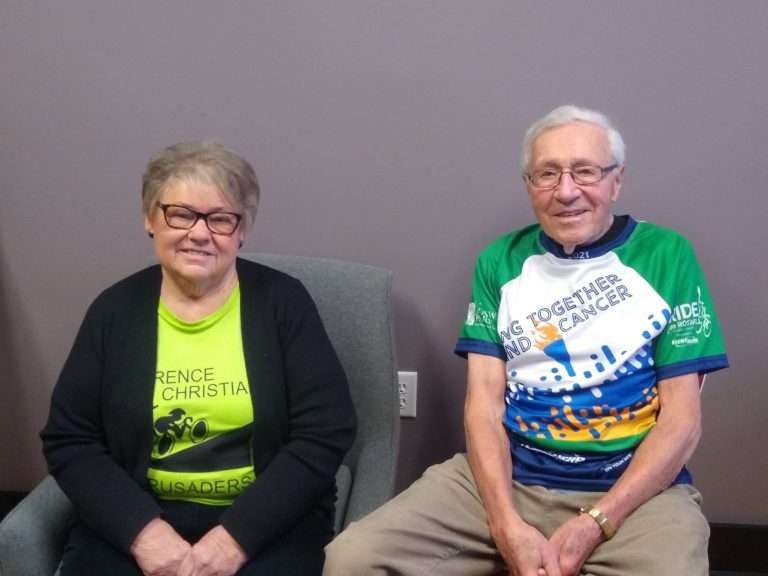 For Julie and Bob Furminger, the Ride for Roswell is a quarter-century tradition that keeps getting more meaningful with time. It all started 25 years ago with a gift. A dear friend of the Furmingers gave them a racing bike shortly before he passed away from cancer. The couple saw that as an opportunity to honor their dear friend and put the bike to good use by participating in their first-ever Ride for Roswell.

That first year left a strong impression on the Furmingers. They rode through pouring rain and got soaked to the bone pedaling down cobblestone streets. It wasn’t easy, but it was worth it.

One image remains with them to this day:

Twenty-five years later, the Furmingers are still riding strong for everyone affected by cancer at Roswell Park and beyond. Despite the normal obstacles of everyday life, they commit to riding year after year. Even their most recent challenge — Bob’s hip surgery — couldn’t stop them from participating in a tradition they love.

According to the couple, the Ride for Roswell has gotten even better with time, bringing new traditions, bigger celebrations and different ways to ride. This included the formation of their team, the Clarence Christian Crusaders. When the Furmingers shared their enthusiasm for the Ride for Roswell with their church, the entire community rallied behind them and decided to ride together. Since the pandemic, the team has leaned into the Ride Your Own Way Option, which has given them the ability to ride from anywhere and chart their own course while supporting the same great cancer cause.

This year, they plan to cover 25 miles with 30 other church members riding or cheering them on. A few preschool kids will also join them for a shorter ride to a local ice cream shop. Their parents see this as a teaching opportunity, showing their little ones that helping the community matters (while giving them a sweet treat).

The Furminger’s team isn’t the only thing that’s grown over the years — their fundraising has, too. The Clarence Christian Crusaders has managed to fundraise thousands of dollars for cancer care and research at Roswell Park over the years with more than $21,000 raised last year alone. They’re hoping to match that number again this year. The Furminger’s fundraising efforts are eclectic with some donations coming directly from their church community and others coming from their friends and loved ones and friends of loved ones. They write personalized letters each year to the people in their lives, explaining what they’re doing and asking for donations. Last year, they sent out between 50 and 75 letters, and almost all of them came back with donations.

“It doesn’t have to be a large donation,” Bob says. “It can be a small amount of money, but the more people who donate, the more money we’re going to get. And that’s what it’s all about — getting enough to keep the research going.”

As times passes, more people in the Furmingers lives have been affected by cancer, including friends and team members. This year, the Furmingers will be riding for their daughter-in-law, who was recently diagnosed with cancer and began treatment at Roswell Park. This experience has brought a renewed sense of urgency in their fundraising for clinical trials and research.

“I have lost so many friends [to cancer], and if I can do anything to slow that down or stop it, I would consider my efforts successful,” Bob says.

Thinking back on her 25-year journey, Julie had one last sentiment to share.

“A long time ago, I met a lady from Barcelona, Spain,” Julie recalls. “She was given a scholarship to come to the famous Roswell Park hospital. She had just graduated from medical school, and it was the fifties. She impressed me, and I thought, ‘Gee, that’s really an important place down there.’ I still feel that way about Roswell Park. I just feel good about helping.”

Join the Furmingers at the 2022 Ride for Roswell today.