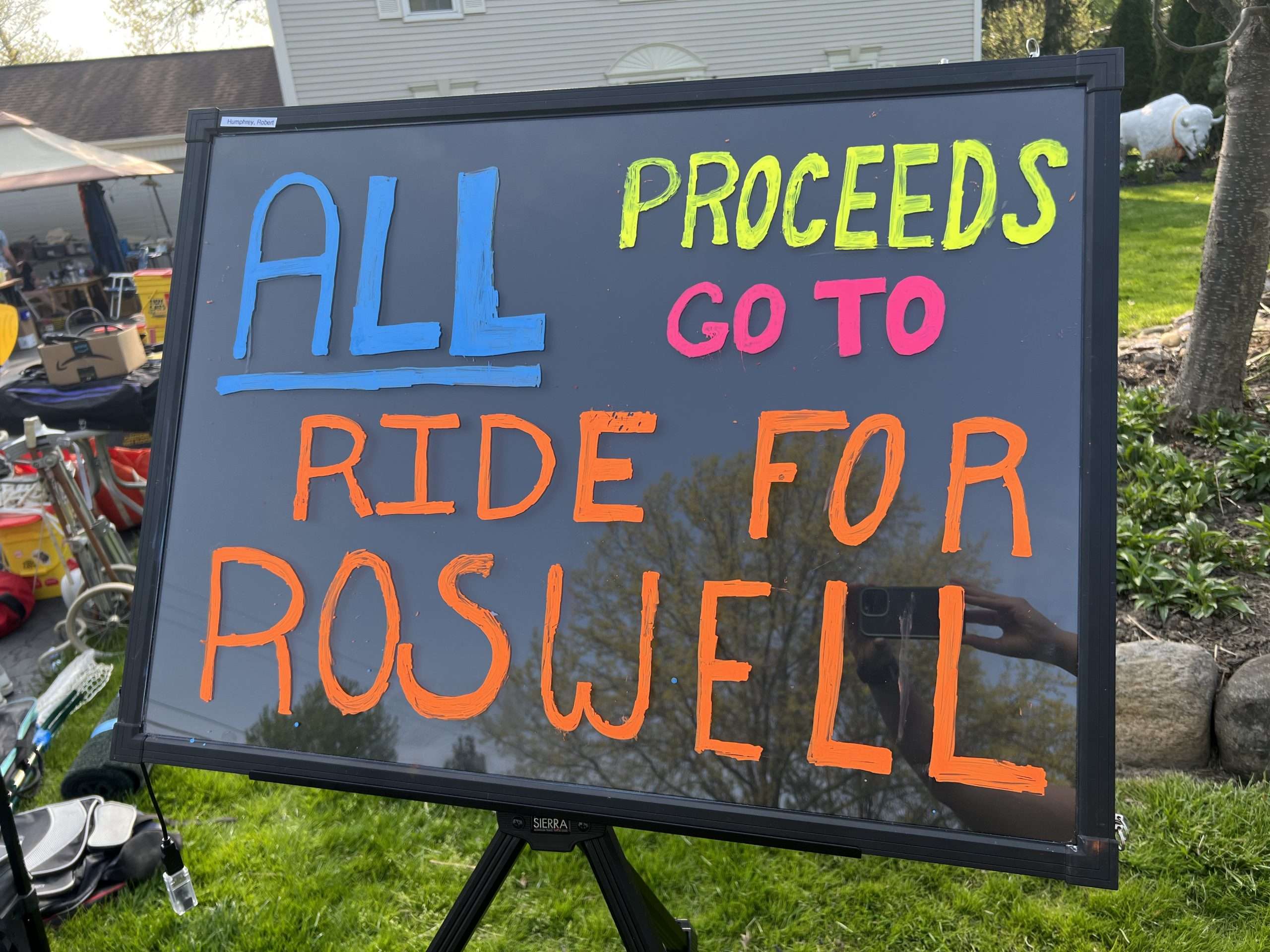 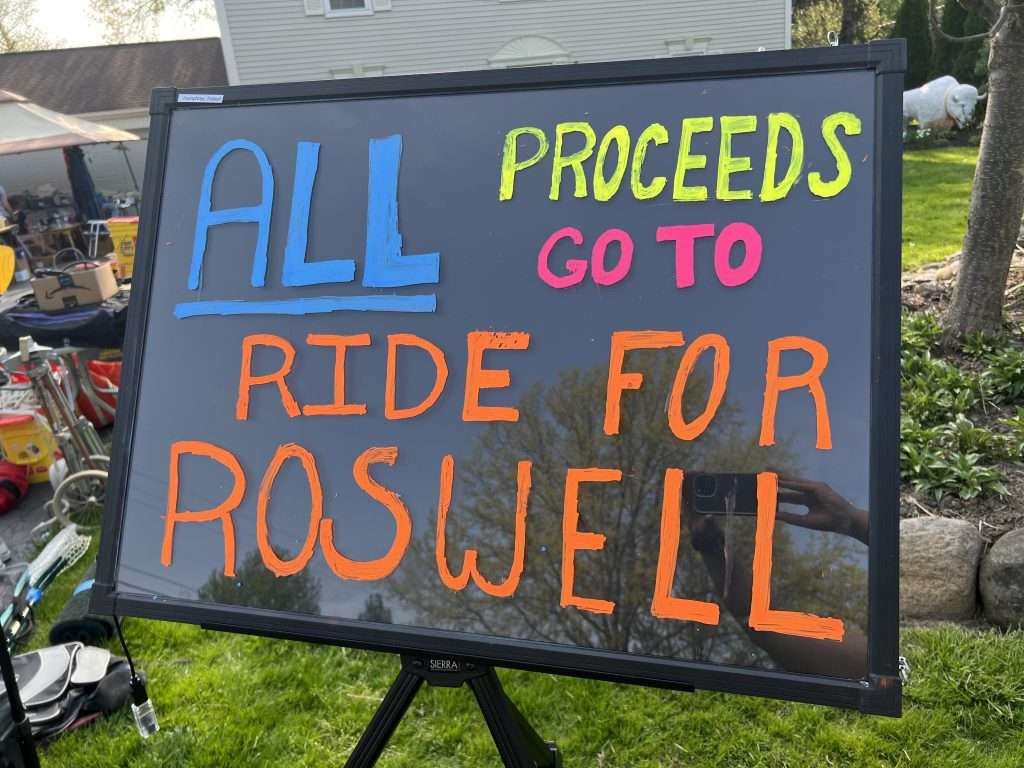 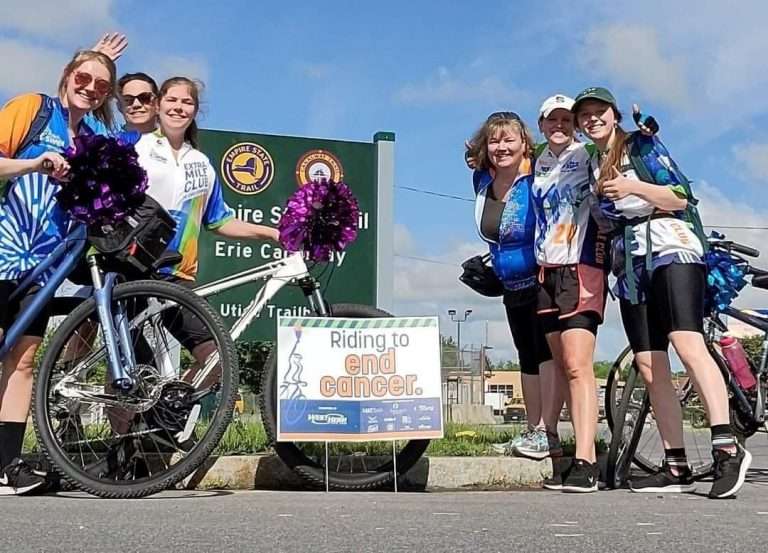 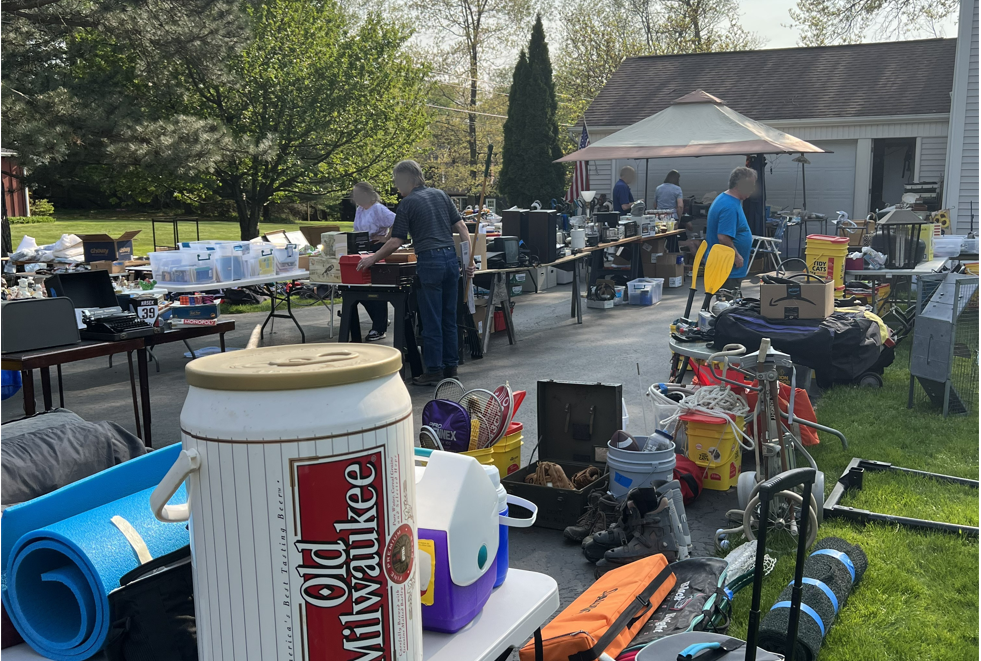 Hitting your fundraising goal can seem difficult, especially if you haven’t fundraised before. While Facebook is one great tool to spread the word and rally people, it’s not the only way — just ask Extra Mile Club member Ellen Geitter.

Ellen has been participating in the Ride for Roswell for nearly a decade. In recent years, she has been joined by her sisters — Mary, Megan and Karen — and two nieces. The Ride is their way of honoring their mother who passed away from small cell adenocarcinoma, an aggressive lung cancer. Through clinical trials at Roswell Park, their mom turned a two-year prognosis into eight years, and the sisters feel strongly about giving back in her memory. This year, Ellen her family will be Riding Their Own Way along a thirty-mile route between Utica and Rome, NY, on the Erie Canal.

Ellen had already raised more than $1,200 for Roswell Park, but with the weather warming up, she saw an opportunity to do even more in the fight to end cancer. She and her sisters sifted through tons of items, and Ellen asked herself, ‘What do I need? What don’t I need?’ They ended up with a lawn full of treasures and the idea of donating all the profits to the Ride for Roswell.

“I’m a blessed person, and I want to pass that along. If this can be in service of that and move me along, then it’s worth it,” Ellen says.

At the end of the weekend, Ellen and her family raised more than $3,300 from their garage sale. How are you fundraising to end cancer this summer? Let us know on social media!

Donate to a rider
Register 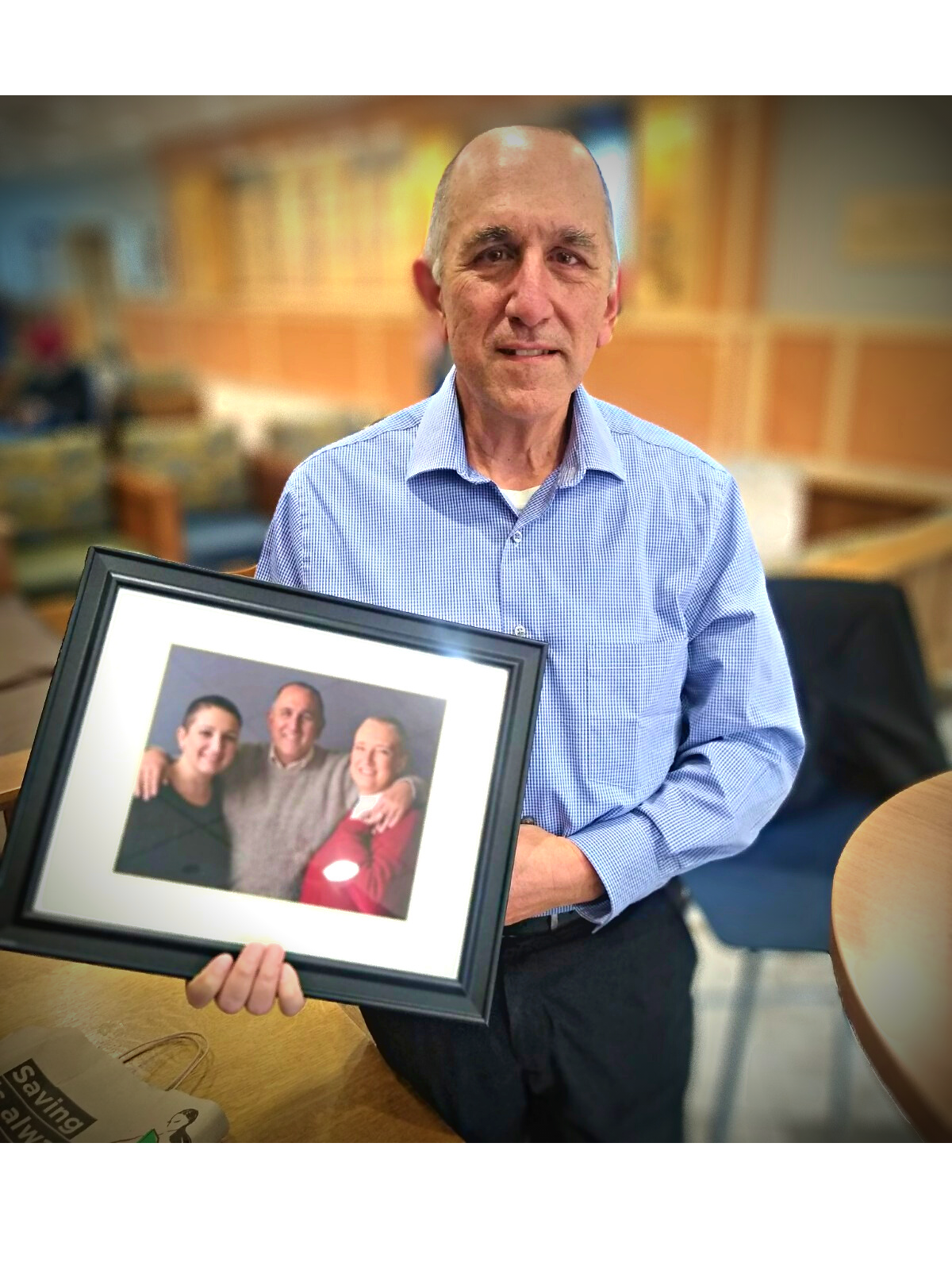 Sam Accordino:
Riding His Own Way in Alaska 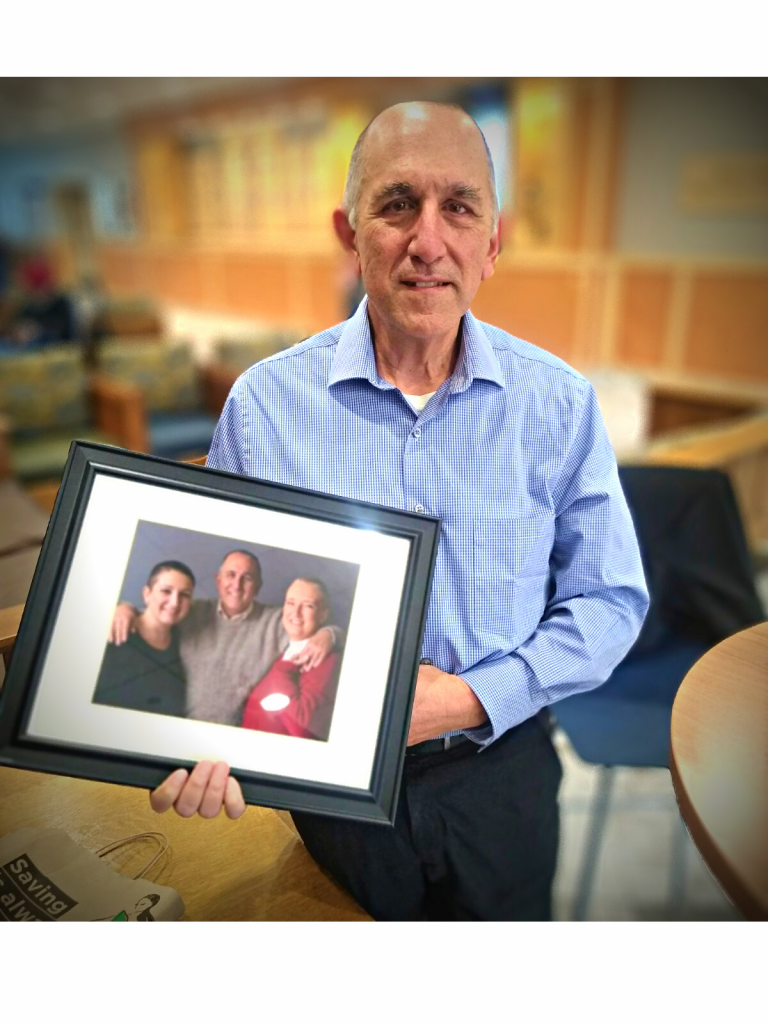 Cancer impacts every one of us, but for Sam Accordino, that six-letter word has irrevocably shaped his life. 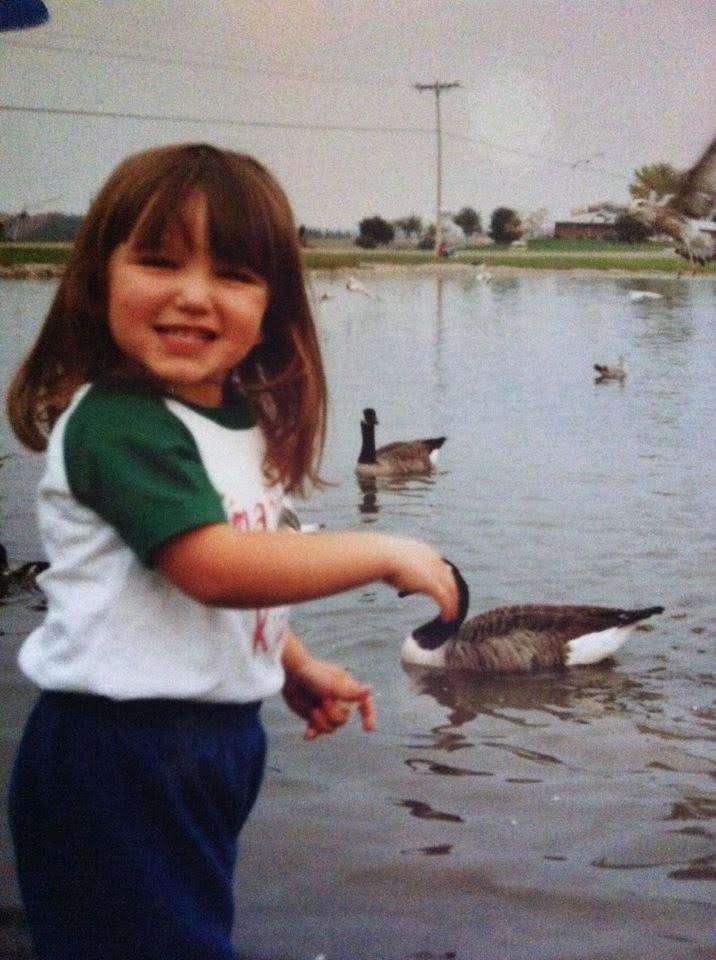 Sam’s daughter Casey was always strong-willed. The oldest of three, she took the lead in all things involving her younger brothers, Nick and Max. She proudly donned mismatched socks and loved watching her favorite sports teams, especially the Bills, Sabres and Bisons. She was outspoken yet honest. As a kid, she managed to get caught by her parents every time she skipped school. As a young adult, she worked as a social worker and gave selflessly to others, bringing hope to those around her.

“She came into the world screaming, and she ruled the roost,” Sam says. “She really was a fun-loving kid — a giving, caring and wonderful person.”

Even as she battled cancer, Casey sought ways to uplift others, joining groups at Roswell Park like the Young Adult Cancer Program and making friends with nurses and patients alike. She was diagnosed with cervical cancer in 2013 and underwent surgeries, chemotherapy and radiation at Roswell Park. She entered remission. Thinking she had it beat, she looked forward to the next phase of her life and marked the occasion by marrying her best friend, Kevin.

But cancer had its own plans. In October 2017, Casey’s cancer returned, much more aggressive this time. At the same time, her mother was diagnosed with endometrial cancer. 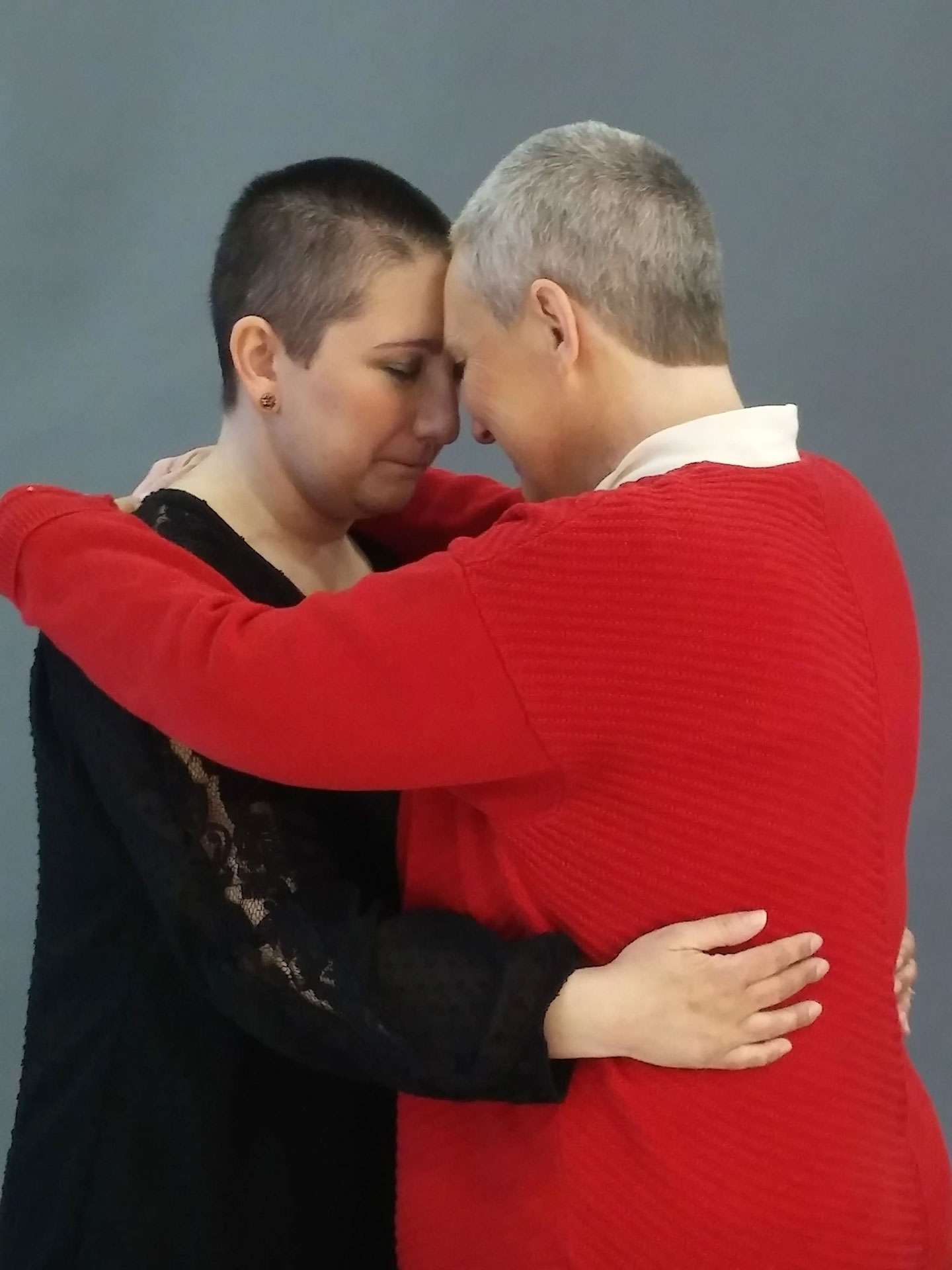 Sam’s daughter will always be his first and foremost reason why — the driving force behind his desire to end cancer. Casey’s journey isn’t the only one that’s impacted Sam, though. His 94-year-old mother survived both breast and ovarian cancer, and Sam recently learned that he has prostate cancer. Sam’s wife, Annette, discovered that she had carcinoma and went through treatment at the same time as Casey. Annette and Casey alternated rounds of chemo so they could care for one another, though they occasionally shared a room and an IV stand.

After additional surgeries and rounds of chemo, Casey passed away on October 27, 2018, three weeks after her 32nd birthday.

On top of everything else, Annette also learned that she has the BRCA2 gene — the gene that carries a high risk of developing breast cancer. As a preventative measure, Annette underwent a double mastectomy. The couple is trying to get ahead of cancer any way they can.

“I’ve had heartache, and I’ve had successes,” Sam says. “I wish the outcome would’ve been different for Casey, but unfortunately that’s how life is. Cancer affects a lot of people.” 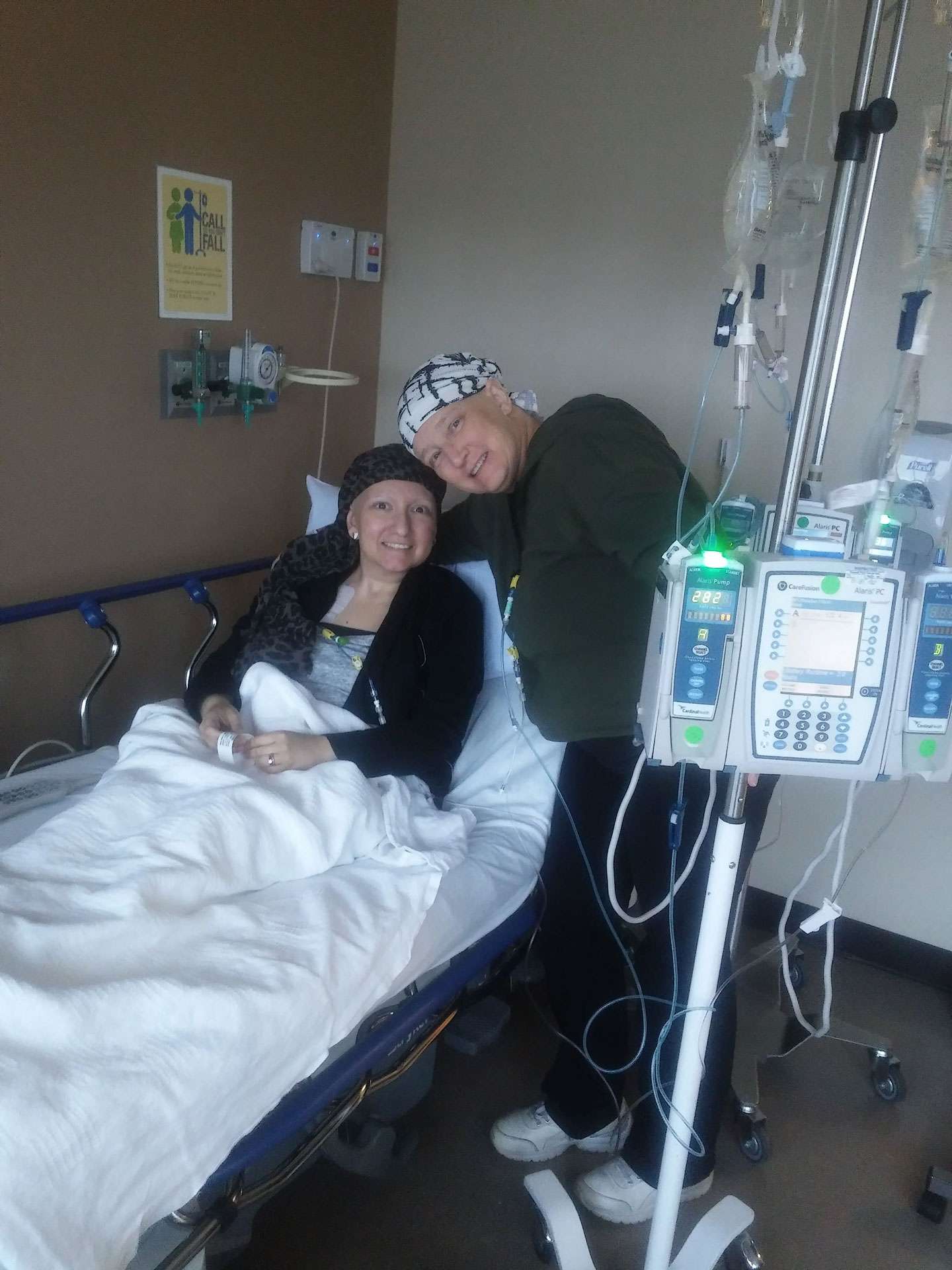 One of the ways Sam is working to get ahead of cancer is by participating in the Ride for Roswell. His goal is two-fold: honor Casey and work toward a world where fewer people have to say goodbye because of cancer. He’s doing that by riding and fundraising for Roswell Park, the institution that supported his family during some of their most difficult days.

“A lot of people don’t know about the numerous services Roswell Park offers like pastoral care, wellness activities or grieving sessions,” Sam says. “We still get together with some of the people we’ve met through Roswell.”

Sam aimed to raise $5,000 dollars toward cancer research, a milestone he’s already exceeded. The achievement will be rewarded with an engraved brick in Kaminski Park. He will dedicate that brick to Casey and her unwavering strength. 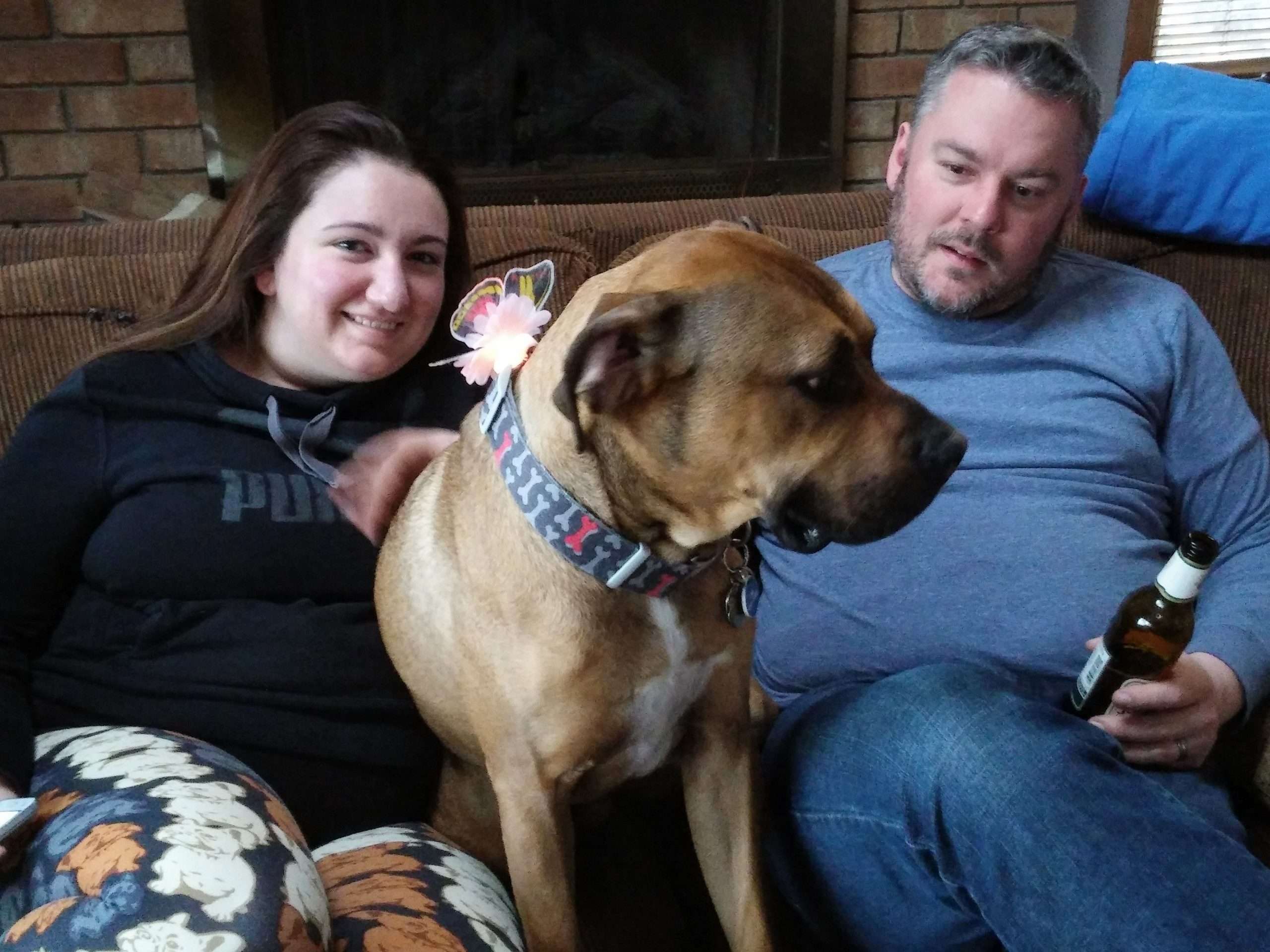 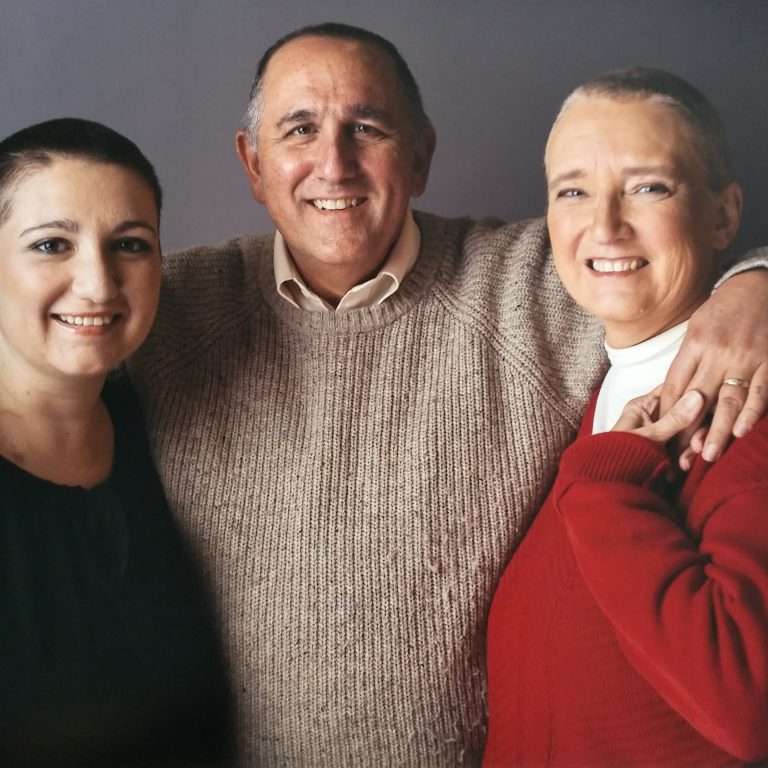 When Sam decided to participate in the Ride for Roswell this year, he wasn’t sure how to make it work. The event takes place on June 25, the same day he planned to be on the other side of the continent. For the past three years, he and his wife had been trying to get away to Alaska, but the trip kept getting postponed due to family conflicts and the ongoing pandemic. The pair finally booked their vacation — on the same day as the Ride. That wasn’t going to stop Sam.

With the Ride Your Own Way option, Sam can participate in the Ride for Roswell from Anchorage, Alaska. His game plan is ambitious: He’ll ride in the Peloton during Celebration of Hope on Friday, June 24, at the University at Buffalo, hop on a plane Saturday morning and rent a bike as soon as he lands. Sunday morning, he’ll set off on the Tony Knowles trail, an 11-mile path along the coast of Anchorage that passes forests, vistas, earthquake fault lines and Mount McKinley, North America’s highest peak.

“I plan on doing the whole 22 miles unless a moose gets in my way, which is a real possibility,” Sam says, laughing. “It’s going to be a cool adventure.”

When he finishes his ride, Sam plans to celebrate with his wife and friends while remembering Casey, his strong-willed daughter who loved her family, husband Kevin and dog Charlie, and fought with everything she had.

Ride Your Own Way like Sam or join the Ride for Roswell in person on June 25. 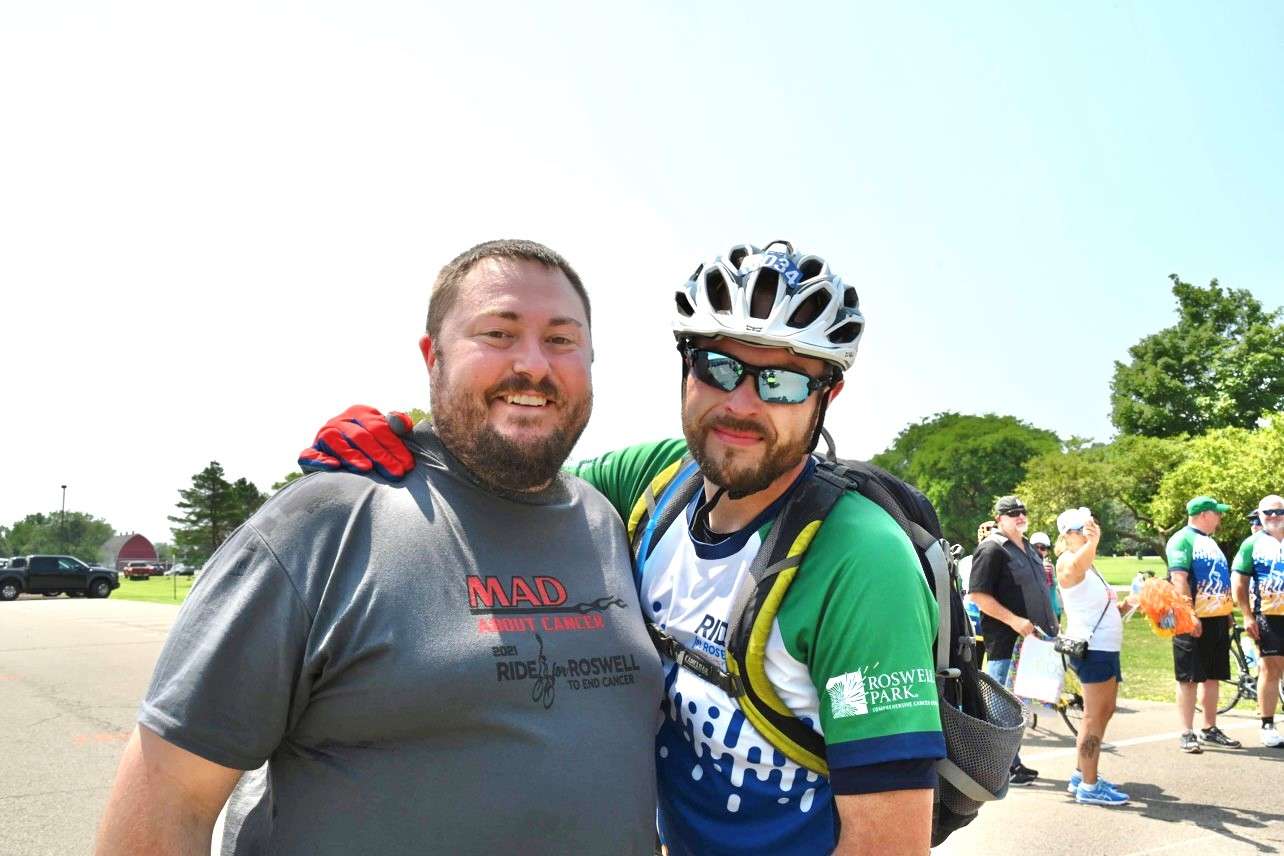 The Draudt brothers fight back

For brothers Adam and Dan Draudt, participating in the Ride for Roswell comes down to one word: hope. They’ve seen the impact Roswell Park has in the lives of cancer patients and know firsthand how cancer can turn lives upside down. To the Draudt brothers, Roswell Park helps cancer patients fight back, giving them hope for a better tomorrow.

In 2021, Adam was told he had multiple myeloma, a cancer of the plasma cells that causes bones to weaken. Luckily, doctors caught Adam’s cancer early, and he was able to fight back through stem cell treatments and chemotherapy. As of February, he is fully in remission. The diagnosis, however, flipped Adam and his family’s world around.

While Adam was undergoing treatment, Dan sought out a way to take action for cancer patients like his brother. He signed up for the Ride for Roswell, wanting to make an impact for future generations. With Adam’s help, they raised more than $34,000 for cancer research! This year, they’re celebrating Adam’s remission by fundraising again.

“The funding that they get from Ride helps people like me go from a [cancer] diagnosis in June to full remission in February,” Adam says. “As a survivor, I see how the funding helps people behind the scenes at Roswell Park make advances they wouldn’t be able to otherwise.” 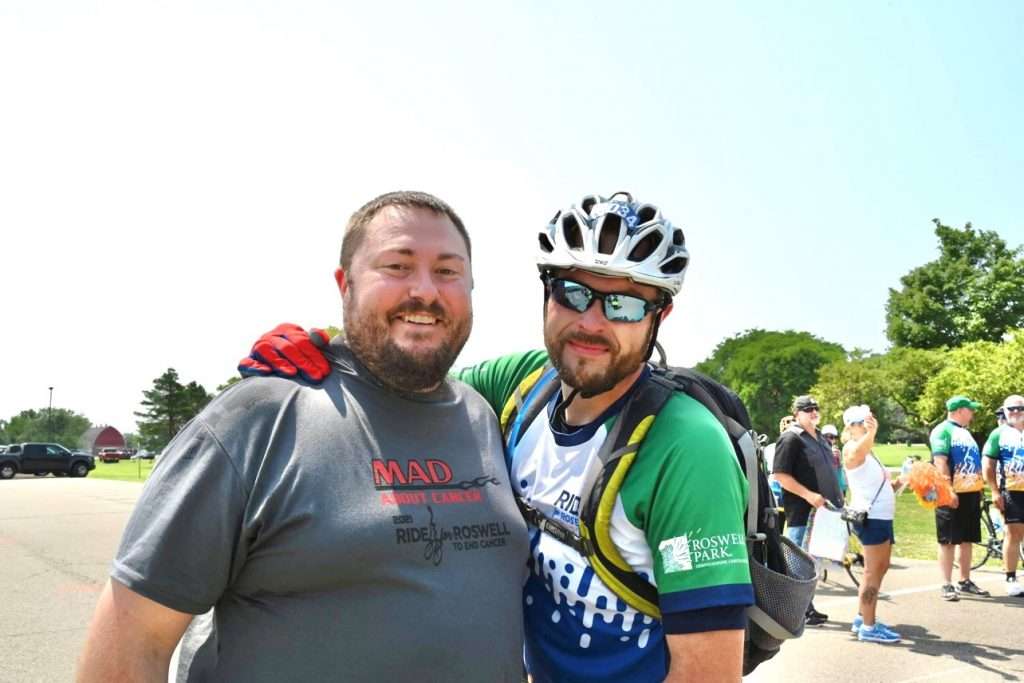 Everyone’s cancer journey differs, but for the Draudt brothers, hope keeps them working toward a world where we end cancer for good. Adam also has a little advice for anyone who might be hesitant to sign up for this year’s Ride:

“Go for it. You’ve got nothing to lose. Even if you don’t finish, you still raised money that’s going to help so many people in the future,” he says.

Check out Adam and Dan’s team, MADaboutcancer, and register for the Ride for Roswell today.