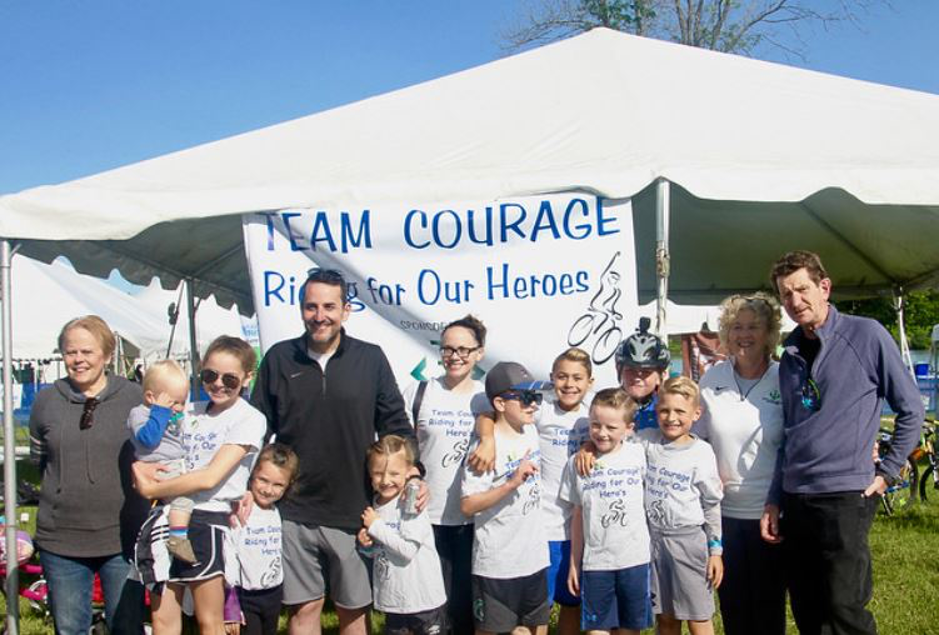 Volunteers will be available during these times to assist you with transporting your items to your tent.

The Team Tent Drop Area will be located along Lee Rd., adjacent to the Furnas and Jarvis B parking lots. View the complete campus map here. A volunteer will greet you and will call for a gator to help deliver your items to your tent location.

As the day comes to an end, gators will also be available at the designated drop off areas in Ride City for transport back to the Lee Loop Team Tent Drop Area. The times for this accommodation begin at 10:30 a.m. until 2:30 p.m. Please note that pedestrian traffic may impact delivery times and our volunteers will do their best to accommodate you.

Bring Your Own Team Tent Reservations

NEW THIS YEAR: You will be able to temporarily park your vehicle to load and unload your tent and supplies in the Alumni B parking lot. To access this area, you will need to enter and exit Webster Rd. off Millersport Hwy.

As the day comes to an end, you will be able to drive your car to the Alumni B lot for breakdown by entering Webster Rd. off Millersport Hwy. This will be the only way to access that lot/area. 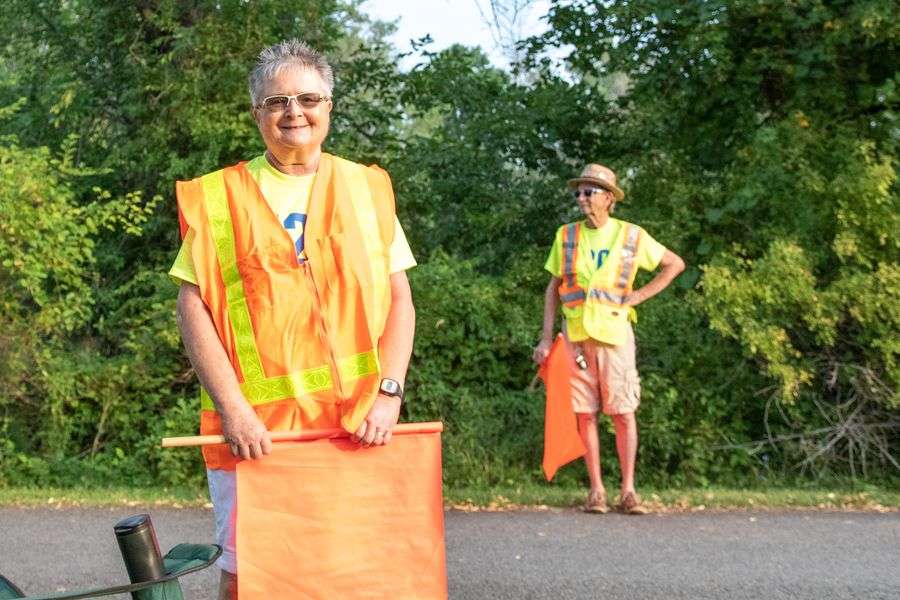 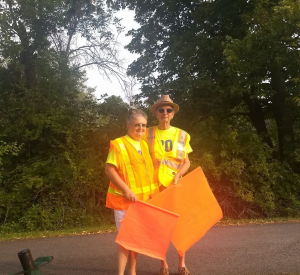 “I’m a cancer survivor by seven years. The colon cancer has been eradicated and the AML (acute myeloid leukemia) is under control. I attribute that to the good care I’ve gotten from Roswell Park,” Ginny Beyer says.

Inspired by her cancer journey and that of her cousin who fought childhood leukemia, Ginny decided to take a stand in the fight to end cancer. Alongside her husband, Roger, she signed up as a route guide for the Ride for Roswell — just to see what it was all about. Four years later, Ginny and Roger couldn’t imagine missing the event.

“I’ve got one of my Ride for Roswell T-shirts that says ‘survivor.’ Of course, it’s vibrant orange. I wear it everywhere, and people go, ‘Wow, congratulations!’ and I tell them about the event. So, Ride is a whole year-long thing now.”

Ginny and Roger set up post at the first turn on the Ride course, right after the cyclists exit the University at Buffalo. It gives the duo the chance to see people at the start of their journey, at a moment when their excitement is fresh and tangible. They see riders, young and old, of all different backgrounds and abilities. Ginny vividly remembers one rider who was tackling the 30-mile route while hooked up to oxygen.

“I thought, ‘Wow, you’ve courage, lady,’” Ginny says. “There’s story after story like that, of people showing their strength to fight cancer.”

Being a route guide gives Ginny the ability to motivate people and cheer them on while making sure the event runs smoothly. That role, in turns, brings her joy and allows her to have fun. You’ll often see Ginny and Roger decked out in full costume with red noses and cowbells, ready to delight riders as they take the first turn. Sometimes the riders are decked out in costume, too — in tutus or superhero costumes — which takes the whole experience to the next level.

Beyond the fun, Ginny and Roger play a vital role in directing riders and making sure they take the right turn for the right route. Without their help, people would get lost more easily, and the Ride wouldn’t be the success it is today. Plus, Ginny says, volunteering for the Ride connects you directly to a cause that spreads hope for cancer patients like her. She encourages everyone to do it.

“Do it because it is a lot of fun, and they need the help,” she says. “Whatever your limitations are, there’s a spot for you.”

Join Ginny and register as a Ride volunteer today.

We are so excited to be able to gather once again at UB after a long day of riding. There really is nothing better than celebrating crossing that finish line with family and friends in your own team tent!

These are the tent options this year for our team captains at UB:

Bring Your Own Tents 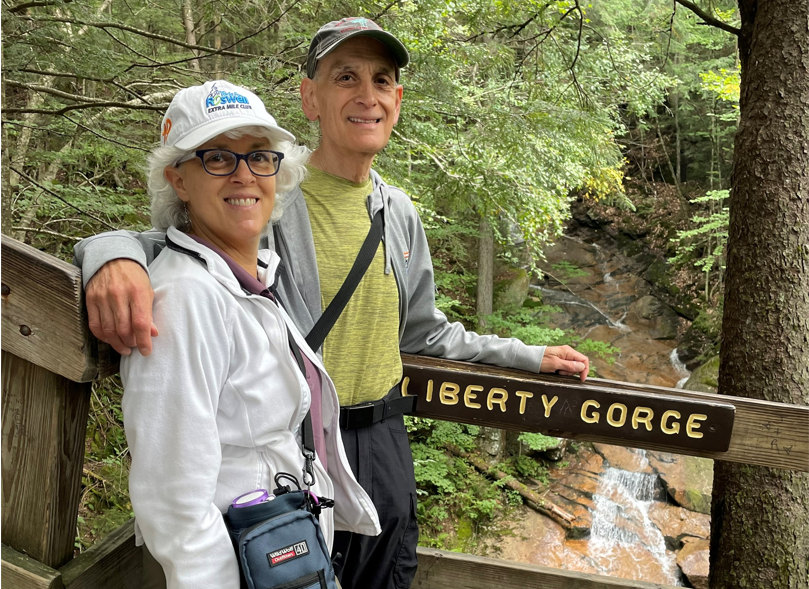 For the past 11 years, Lettia Milito has shown up before dawn on the morning of the Ride for Roswell with coffee in hand. She begins final set-up for the event before the sun comes up, while most of Buffalo is still asleep.

“It’s dark, cold and nobody’s there, but I love it at that time. The sunrise is absolutely gorgeous, and there’s just so much promise,” she says.

Lettia oversees a team that loads supplies in and out for Ride Day and the Celebration of Hope. Her duties typically begin the week leading up to the event and end long after the last rider has crossed the finish line. She started volunteering more than a decade ago to fulfill a requirement for her project management certification, but she comes back every year for the people, the atmosphere and the positive energy — not to mention the great cause.

Lettia’s husband, Vinny, began volunteering with the Ride about six years ago, around the time he retired from his job as the director of global customer services at Oracle. In addition to managing the loading and unloading of supplies, he also oversees the distribution of supplies to each rest stop, matching the number of riders expected to pass through to available supplies. Supply quantities change often, so distribution remains fluid until the trucks are fully loaded the day before the Ride.

“There are challenging moments, but in spite of it all, we make sure everybody has the supplies they need,” Vinny says. “When the last of those trucks leaves, there’s a lot of satisfaction in knowing that the rest stops will be ready to go come Saturday morning when riders start coming in.”

Lettia shares similar sentiments and says she enjoys both managing logistics and setting her crew members up for success. When asked on Zoom why people might want to volunteer, she gave a slight smirk and said, “Well, everybody knows my team has the most fun.”

Lettia was half joking, but most of the volunteers she works with are repeats like her and Vinny who keep coming back year after year. She remembers one particular volunteer, a high school student whose mother made him get involved. His disgruntled attitude soon dissipated into laughter, and by the end of his shift, he was truly enjoying himself. That volunteer came back again the next year — that time, of his own accord.

Load-in and load-out roles tend to be extremely active and are perfect for those looking to get their steps in. According to Lettia and Vinny, though, there’s a perfect job for just about everyone.

“There are so many different things that you can do,” Lettia says. “There’s going to be something you’ll enjoy doing.”

“A lot of people feel like they should volunteer for something but don’t know how to get started,” Vinny says. “The Ride is so large now that there’s going to be something you can pick that will give you satisfaction in knowing you did something for a good cause.”

To view all opportunities and register to volunteer, visit our page below. 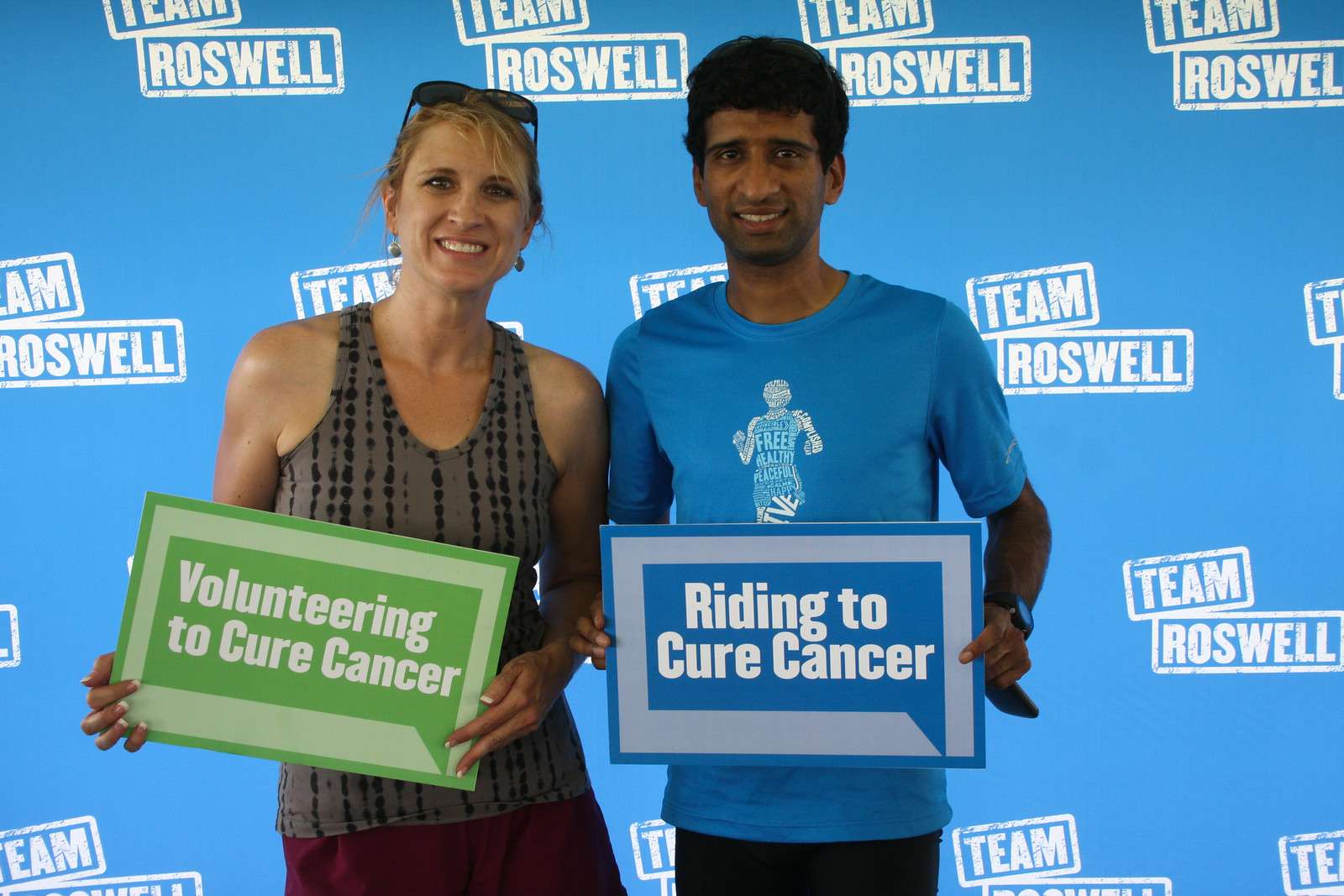 Volunteers are at the heart of the Ride for Roswell and help us make the event a success. We’re looking for more volunteers to join the cause! Whether you have a family member who’s riding or want to lend a hand, these opportunities are a great way to get involved in the fight to end cancer.

What? Volunteers are needed to distribute food and beverage supplies and/or help with clean up. This position involves heavy lifting.

Why? Ride Weekend involves countless supplies and moving parts. These volunteers make sure all supplies get to the right place on campus to ensure the event goes off without a hitch.

When? Volunteers are needed on Thursday, Friday and Saturday. Shifts are generally 3–4 hours, and you can self-schedule based on your availability.

What? Volunteers are needed to work at the Survivorship Tent, help set up and clean up, or serve food to event participants.

Why? The Celebration of Hope kicks off Ride Weekend, and volunteers keep the event organized, safe and successful.

When? This position is for Friday night. Shifts are generally 4–5 hours, and you can self-schedule based on your availability.

What? Volunteers will direct riders at turns and intersections, watch out for rider safety and cheer on participants.

Why? You’ll be at the center of The Ride action. This opportunity is great for volunteering with a friend or neighbor.

When? Volunteers report on Saturday. Shifts are generally 3–4 hours, from early morning until early afternoon. You may sign up for more than one shift, if interested.

Where? Volunteers are needed throughout The Ride for Roswell routes!

What? Volunteers are needed to help direct the flow of traffic to parking spots and assist riders around campus.

Why? There are 10,000 people on campus at any given time throughout Ride Weekend. Campus and parking guides are responsible for greeting and directing riders and guests, as well as making sure both pedestrian and vehicular traffic runs smoothly.

When? This opportunity is for Friday and Saturday. Shifts are generally 3–4 hours, and you can self-schedule based on your availability.

Where? Volunteers will report to various UB North Campus locations.